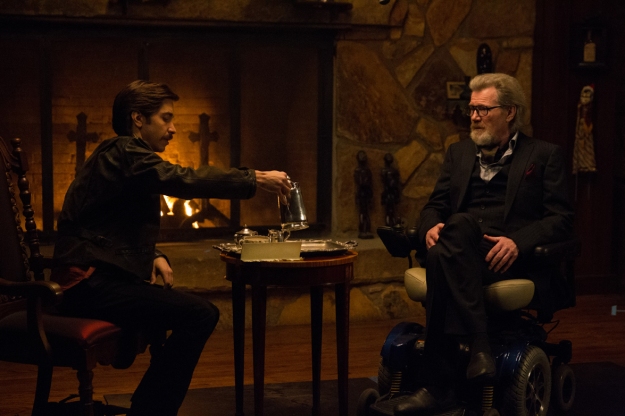 Here’s the bottom line: “Tusk” kind of blows. But. I understand why it blows, and I even appreciate that it blows.

I attended a screening of the film at the ArcLight Cinema in Hollywood, after which director Kevin Smith explained and giggled about his latest horror-comedy.

I’ll try to keep it brief about the actual movie, because the actual movie is not really the point of this movie. The story follows an obnoxious podcaster, Wallace (Justin Long), who travels from Los Angeles to Manitoba, Canada in search of a subject for his next broadcast. He meets with Howard Howe (Michael Parks), a retired adventurer who is looking for a lodger to share his isolated mansion. Howe begins telling fantastic stories of his various journeys until one thing leads to another and it becomes clear that he intends to butcher Wallace, sew him into a suit made of human skin and make him live as Howe’s personal walrus companion, Mr. Tusk. You know how these things happen.

There are a handful of laugh-out-loud funny scenes, but “Tusk” never really gets creepy enough. I was expecting special effects makeup artist Robert Kurtzman’s Leatherface-style walrus suit to be pretty disturbing, but it was just a disappointment.

“Tusk” features some amazing collaborations with other artists, though. Parks is excellent throughout the film. He is equal parts dignified and unhinged, and he appears to take the role incredibly seriously, which is a feat in itself. Johnny Depp appears as French-Canadian private investigator Guy Lapointe, and both Depp’s and Smith’s teenage daughters make cameos as convenience store clerks, which is cute. The icing on the cake is the soundtrack, which includes Fleetwood Mac’s “Tusk” (of course), as well as a maudlin closing track recorded for the film by former My Chemical Romance frontman Gerard Way. 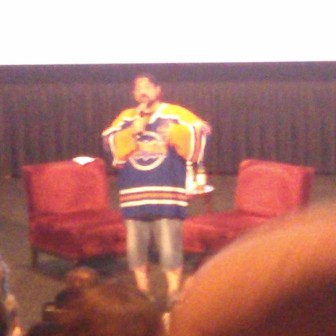 Director Kevin Smith speaks at the ArcLight Cinema in Hollywood after a screening of his horror-comedy “Tusk.” SCREAMfmLondon

So, no, the movie “Tusk” is not very good. Like, at all. Not at all. I don’t really have any desire to ever watch it again. But the story behind it is interesting, electrifying and inspirational.

The tale of “Tusk” began a little more than a year ago during an episode of SModcast, the podcast that Smith hosts with his friend Scott Mosier. It starts with an offhanded observation that a joke real estate listing sounds like the premise for a horror movie and turns into about an hour of speculation and laughter about what that horror movie would look like. And now here we are with the fully-realized thing in our actual midst.

It’s not very often that someone happens to record and broadcast the exact moment they conceptualize what will go on to become a major motion picture. With “Tusk,” Smith makes the filmmaking process completely transparent, from the original inspiration to the fleshing out of a plot, through production and culminating with a finished product. He shows the audience that creating isn’t such a difficult process: you too can turn a stupid idea into a stupid reality if you work hard enough at it.

The overall message to take away from “Tusk” is that you should have faith in your stupid ideas. Bring them to fruition. Who cares if other people think they suck? That’s fine. At least you did something you wanted to do. Lots of things suck, and some of them could be yours if you set your mind to it.

I didn’t even like the movie, but I still left the theater feeling incredibly excited about all the stupid dreams I have to pursue. As Kevin Smith told us during his Q&A session, we’re all going to die. Might as well make a goofy horror movie with your friends. Why not?