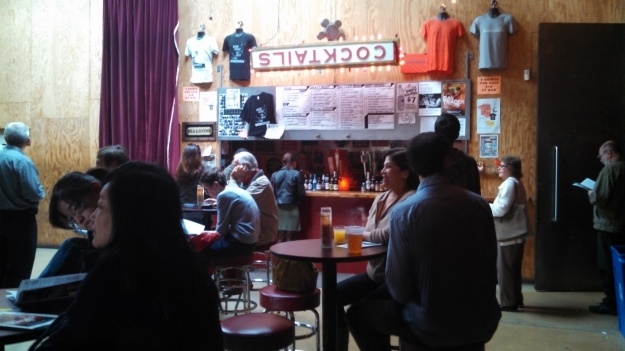 “Everyone knows a career in Hollywood is a gamble, and this play asks if people can ever come to grips with the fact that a large part of gambling is losing,” playwright Eric Rudnick is quoted as saying in the playbill for the Bootleg Theater’s current production of “Day Trader.”

The play is expertly staged, using sound bites of Mo Gaffney’s soothing narration from a how-to book on day trading to break up the scenes. The ongoing theme of day trading (the buying and selling of financial instruments before the market closes for the trading day) mirrors the plot of the play as unhappily married screenwriter Ron (Danton Stone) uses his family and friends as bargaining tools in an attempt to score a fortune from his wealthy wife and, thereby, make himself finally feel meaningful.

The Bootleg Theater makes excellent use of the space, projecting elements onto the minimal backdrops and revealing a jazzy drummer (Josh Imlay) to accompany the narration during scene changes. Although Ron’s wife Brenda never makes an onstage appearance, her presence is still felt through the shadows in the background and the snippets of Shakespeare she leaves for Ron to discover at opportune moments, foreshadowing the development of the plot (“A little more than kin, and less than kind”).

Particularly impressive is the performance of 14-year-old Brighid Fleming as Ron’s daughter Juliana. While the audience sees her deal with the dissolution of her parents’ marriage and crave a better relationship with her father, in true Hollywood fashion, we also see that she is smarter and more capable than anyone anticipates.

Ron has long been yearning for a way out of his marriage, but, as per his prenuptial agreement, he is unable to file for divorce without forfeiting the share of his wife’s fortune to which he would otherwise be entitled. When he meets a beautiful young waitress/aspiring actress named Bridget (Murielle Zuker) who wants to help him get his hands on the money (and is willing to accompany him on overnight trysts in Solvang), he thinks his luck is finally turning around.

The plot is exciting — particularly in the final act, wherein the characters show their true, twisted, morally corrupt selves. The resolution is delightfully cynical and entirely satisfying.

And, moreover, the Bootleg Theater is impressive. It’s an interesting space that hosts a number of art events, from dance and theater to live music and spoken word. The set designers and stage managers are clearly very talented. It will definitely be worth checking out what they come up with next.

‘Day Trader’ at the Bootleg Theater