Last year, I saw the first two concerts of Big Bang’s MADE World Tour, where the group introduced the first singles from the “MADE” album series. Over the past few months, Big Bang’s “MADE” songs have dominated the charts and racked up awards while the band has performed a record-breaking tour around the world (the biggest k-pop show held in Canada, the largest k-pop arena tour in the US, the largest crowd a foreign artist has drawn in Japan).

On Sunday, March 6, Big Bang officially performed the final MADE concert back home at Olympic Gymnastics Arena in Seoul. The final show (the last of three Seoul concerts this weekend) was livestreamed worldwide and reached more than 3 million viewers. For those of us in town, the sold-out shows inspired fans to queue for hours in the pouring rain hoping for last-minute tickets (yes, including me, hello).

The show opened and closed with a bang — three, to be precise. “Bang Bang Bang” was the unofficial song of 2015, sweeping year-end awards and blowing everyone’s minds with its powerful chorus, extraordinary lyrics, and ultra-catchy dance beats. The song’s best lines set the tone for the night’s atmosphere: “Today, this place is lawless. / I’ll set this place on fire to burn up your heart. / I wanna make you go crazy.” Let’s go!

Throughout the night, Big Bang powered through the majority of their “MADE” hits including “Sober” (during which the band members donned fabulous glittery jackets of varying styles), the heart-breaking ballad “If You,” and “Zutter,” the amazing hip-hop duet featuring G-Dragon and T.O.P. Last April, Big Bang introduced “Bae Bae” and “Loser,” the tracks from the first “MADE” EP, at the Seoul concerts. This time around, the group performed “Bae Bae” twice, and fans throughout the arena held up signs proclaiming “Big Bang is my everything.”

The band members treated Korean fans to their usual solo stages as well as some additional silliness. Seungri performed a dance to Beyoncé’s “Single Ladies,” and self-proclaimed dance god/ghost T.O.P also really cut a rug in the strangest manner possible. GD sprawled out on the stage in front of me, cuddled with a stuffed panda, and then descended into the audience to cause some pandemonium — to our utter delight. The Big Bang members are ceaselessly charming and brimming with talent. There is a reason hundreds of us huddled under our umbrellas all day for the chance to see them live.

As the show wound to a close, we were all sad to see the end approaching. In addition to concluding the MADE World Tour, these shows also marked the 10th anniversary of the band’s debut in 2006. Before leaving the stage, Big Bang announced plans to hold a 10th anniversary festival this summer, earning shrieks of joy from fans who have been worried about the band’s future as the time for the members to enlist for their mandatory military service draws closer.

Finally, the band showed off their ten years of experience and expertise with an encore of “Bang Bang Bang” as well as the seminal 2012 hit “Fantastic Baby.” As always, Big Bang is a sight to behold. I fully intend to be there for the day-long anniversary festival this summer, and wherever the road takes them after that. After all, Big Bang is my everything.

View of Mapo-gu from the 34th floor, overlooking the Han River. SCREAMfmLondon

Infinite kicked off their Infinite Effect world tour with a concert at Olympic Gymnastics Arena in Seoul on Aug. 8. SCREAMfmLondon

A collection of Amedeo Modigliani’s portraits are on display at Seoul Arts Center from June 26 – Oct. 4. SCREAMfmLondon

Approaching Olympic Park in Seoul this weekend was like arriving in Emerald City at the end of the yellow brick road. The expansive sidewalks were lined with banners billowing in the wind — each one depicting a member of the five-piece K-pop group Big Bang sporting a ridiculous hairstyle. Above them floated giant, luminescent balloons displaying phrases like “빅뱅 IS BACK.” It was magical.

Big Bang’s official light sticks are so cool until you’re trying to see around them in the crowd. SCREAMfmLondon

The moment had finally arrived for Big Bang’s much-anticipated comeback after about three years of the members focusing on solo work and not releasing any new group material. The momentous occasion was marked with two consecutive concerts at Seoul’s Olympic Gymnastics Arena on April 25 and 26 — and I attended them both.

The MADE 2015 World Tour dates in Seoul served to usher in a new era for the band. Here’s the plan: Big Bang will release an EP on the first day of each month from May to September of this year (“M,” “A,” “D” and “E”). Each EP will feature two new singles — until September, when the full-length studio album “Made” will finally be released. It’s kind of complicated. I love it.

The first two songs — due to be released May 1 — were introduced at this weekend’s concerts. And they are both killer tracks.

The group presented “Loser” first by screening the official music video, which was filmed just a few weeks ago in downtown Los Angeles. One scene shows G-Dragon sprawling out despondently across Spring Street as the ol’ Metro Rapid lumbers past. Truly a merging of my favorite worlds. 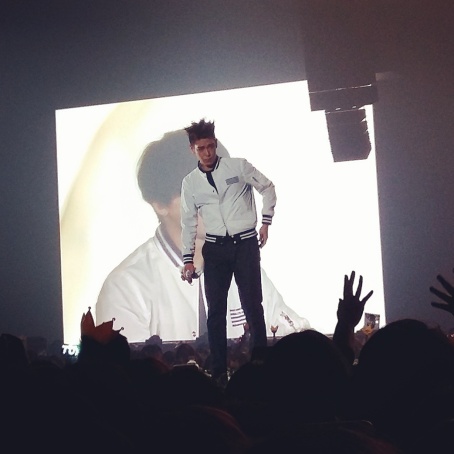 T.O.P rocking that hairstyle like only he can. SCREAMfmLondon

The video is exactly the kind of music video I love — a classic strung-out, rock ‘n roll aesthetic to match the song’s maudlin theme. Taeyang spray paints messages about sin at a trailer park, Seungri smashes some furniture, Daesung gets his ass kicked out front of a convenience store, T.O.P wears his pajamas outside. It’s perfect, and it perfectly matches the song’s gorgeous lyrics. In the first verse, G-Dragon admits, “Honestly, I’ve never fit in… / Love was already forgotten to me, who was alone. / I’ve had enough of hopeful love songs.”

After screening the video, the band reappeared onstage in a revolving platform of windows and mirrors to perform the song live for the first time. In fact, they performed each of the new songs about three or four times each (if you count some of the a capella bits) both nights, which sounds like it would be annoying but was actually wonderful and super effective in harnessing the excitement for the first EP release. Now I don’t want to listen to anything else. ‘Cause I’m just a loser, loner, a coward who pretends to be strong~

Seungri in the foreground with T.O.P on the big screen. SCREAMfmLondon

During the live performance, Seungri really sold “Loser,” carrying the chorus and adding emotional flourishes to his act. Seungri’s overall performances really stood out at both of the Seoul concerts. In between “How Gee” and “Feeling,” he appeared onstage with a set of turntables to try his hand at DJing, which was a cool way to introduce yet another style of music to Big Bang’s already eclectic repertoire. Seungri was terribly affable and charming during all of his spoken interludes too, but the real highlight was the unexpectedly sexy dance he delivered during “Strong Baby.” Also, his is the only 2015 Big Bang makeover that doesn’t look kinda stupid.

At the midpoint of the band’s three-hour long concerts, each member took the stage solo to show off their individual strengths.

G-Dragon, Seungri and Daesung perform in Seoul on April 26. SCREAMfmLondon

T.O.P made an impression with his intense rendition of “Doom Dada” in a Piet Mondrian-print suit. Definitely in the running for best wardrobe change, but slightly edged out by G-Dragon in calf-length fur, combat boots and gold, glittery jackets for his “Good Boy” duet with Taeyang and solo performance of “Crooked.” G-Dragon is an incredible artist, and it’s pretty awe-inspiring to be in his presence while he’s doing his thing. What a joy it is to be in the same universe, the same country, the same room as Kwon Ji-yong.

Following G-Dragon’s solo, the band premiered its second new song, “Bae Bae,” with a lyric video followed again by a live performance. “Bae Bae” is another brilliant track — so different in tone from “Loser” but nonetheless cohesive. It’s a more seductive, R&B-style track with a mellow, guitar-driven chorus. G-Dragon and T.O.P both deliver killer verses (GD’s intonation on each repetition of “bae bae” is so perfect — I don’t know how he does it). My favorite line is GD’s “Is she a person or an angel? / Oh, Jesus, bae bae!”

There was never a low point at either of Big Bang’s two Seoul concerts this weekend. Both shows were exceptional from beginning to end.

For two days, I had the pleasure of spending three uninterrupted hours watching pop music at its absolute best. It’s truly a sight to behold. I feel like I have seen a lot of things, but I have never seen anything like Big Bang. Onstage, they bare it all: the dedication and work ethic, the unique talents of each member, the genuine enjoyment of the craft, the fun-loving energy, the limitless creativity, the catchiest hooks of “Fantastic Baby” and “Stupid Liar,” the powerful range of “Blue” and “Bad Boy,” the outfits, the dancing, the special effects, the thought put into every moment.

You may have seen a lot of things, but you have never seen anything like Big Bang.