The future is now.

Your watch doubles as a cell phone, cars can drive themselves, and I have appeared onstage as part of a hologram concert.

This is no glitchy “Star Wars”-style hologram, either. This is the real deal. Hologram concerts should be everywhere — this cutting-edge telepresence technology is impressive, interactive and super fun.

Before the main event, you’re able to mill around K-live and enjoy various interactive stations. There’s a “welcome square” where you can get in a car with Big Bang holograms and, later, dance to “Fantastic Baby” with them. There’s a window where you can ring a doorbell and wait for Psy to appear (if there’s any reason you’d like to do that). There’s a garden from which you can get a great view of Seoul and sip very expensive music-themed drinks. There are bronze handprints where you can compare your gigantic monster hands to the stars’ delicate and dainty ones (I’m about 60 times larger than Park Bom, in case you were wondering).

My favorite is the live photo booth where the life-size hologram of your choice will appear onscreen beside you. Not only will they pose for a photo with you, but they will look right at you and talk to you as well. G-Dragon gave me such a tantalizing once-over in the photo booth that I felt a little flushed moving into the concert hall for the show.

Once the doors are opened, the fans are led into the holograms’ air-conditioned lair, where we first have individual headshots taken. Floor-to-ceiling screens show a variety of different flickering images of G-Dragon, which immediately brings life to the room. There is a designated “standing zone” near the front of the stage as well as some bleacher seating in the back. Both options are awkward, as there are only about nine people in attendance, but we all mostly opt to stand up front.

When the show begins, it’s with a brief film on G-Dragon through the ages: footage shows his baby rapping at age eight (adorable!), his trainee days, the debut of Big Bang, the launch of his solo career. But, still, (the narration tells us) he wonders who he really is… And then he remembers… He’s G-Dragon!

The curtain lifts, and the G-Dragon hologram appears onstage particle-by-particle like he’s traveling by Wonka Vision. When he takes a swipe at the air, his hands appear on screens at either side of the audience. It’s spectacular.

Finally, the hologram becomes completely fleshed-out. It no longer looks like virtual reality — it could really be G-Dragon as he breaks into his first song, “Heartbreaker.”

There are dazzling visuals coming from every angle, costume changes and bubble machines as GD’s hologram powers through a medley of “Crayon” and Big Bang’s hit “Fantastic Baby.” The crowd goes wild! Girls are screaming all around me, and it’s hard to believe that none of this is real.

After “Fantastic Baby,” the energy shifts as GD explores his sensitive side. Onscreen, he rifles through a box of mementos from past loves, including (of course) the photo booth pictures of us, his adoring audience. He flips through them, commenting on a few.

“It’s totally over with you!” he announces about one girl, crumpling up her photo and crushing it underfoot. Beside me, she gasps indignantly.

“I wonder if you still turn red when you drink?” he asks wistfully about another.

“I really miss you,” he tells me. He flips through more photos — my goofy face photoshopped next to him in romantic embraces. The indignant gasping from the crowd intensifies as GD approaches the telephone and begins to dial.

As I’m watching, I’m grabbed from behind by staff members who escort me swiftly up the stairs toward the back of the stage, where a payphone has suddenly become illuminated. It rings, so I answer it.

“Uh, hello?” I literally say out loud, even though I’m well aware I’m talking to a hologram. Instead of an answer, I see my own image materialize onstage as a hologram. Whoa.

As the opening bars of “Who You?” begin playing, GD walks casually back out onstage, heading straight toward me. Our holograms coexist on the same astral plane, and all is right with the world. 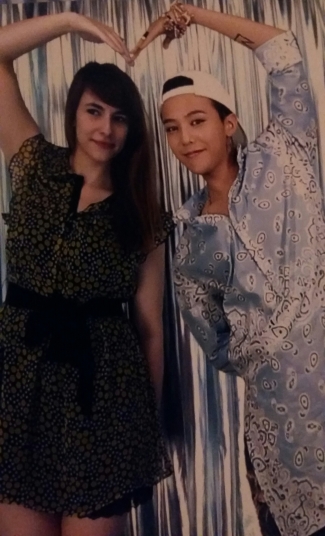 Doesn’t it look like we exist in the same dimension? But he is a hologram and I am a human — it can never be. SCREAMfmLondon

He proceeds to serenade me — it’s very suave. He even gets down on one knee and reaches for me. The other girls in the audience are panicking, but I’m fully engrossed in My Moment. It’s truly magical. GD’s hologram twirls around me, playfully interacting with my hologram. I’m still standing at the phone booth and, in hologram world, light rain begins to fall as the song comes to a close. GD produces an umbrella from thin air and smoothly pops it open over both of us. Then, he tilts it toward the audience, covering our faces as he leans in for the kill.

I don’t know what to do with myself. It’s just so realistic. Feels just like a real kiss! Who needs space travel? This is the most exciting use of technology I’ve ever seen.

A K-live staffer offers me his hand as I stumble back to my original position in the audience, trembling slightly with adrenaline after my adventure through space and time with G-Dragon.

I’m taking some time to recover when the YG “KRUNK” bear appears in the crowd and starts reeling people in to high five and dance with him. After this brief interlude, KRUNK is whisked backstage and then reappears as a hologram onstage. He removes the head of his bear suit to reveal none other than G-Dragon himself! Natch.

The bear suit dissolves as “Crooked” begins. This performance is the most surreal of them all. They take full advantage of the medium to play with the size and position of GD and his backup dancers, as well as his interaction with the scenery. It’s very cool, and I wish I could live in this hologram wonderland.

It’s a little sad rejoining reality after such a strange, futuristic experience. But on my way out, I’m handed two free tickets to another hologram concert for my participation in the show.

So, maybe I will get to live in hologram wonderland after all…