As promised, I did indeed make it to the Los Angeles County Fair to finish up my 2014 to-eat list of fried fair foods, as well as to check out Cher Lloyd and Neon Trees at the End of Summer Concert Series.

The verdict: the LA County Fair is way cooler than the OC Fair.

Deep-fried cheesecake on a stick. SCREAMfmLondon

I immediately started by requesting a deep-fried cheesecake on a stick be made fresh. The cheesecake center was still cold from having been refrigerated, and it was wrapped in crispy deep-fried breading, sprinkled with powdered sugar and drizzled in chocolate syrup. It was everything I hoped it would be.

Another item I checked off the list was an order of deep-fried chicken skins. What a time to be alive! We all know that the skin is the best part of fried chicken, so why not skip the middleman? These were the perfect blend of crispy and chewy with a hint of chicken flavor, highlighted by the greasiness of the deep-frying process.

Finally, I insisted on trying the deep-fried frog legs just because. My theory was that people wouldn’t eat something so odd if it wasn’t delicious, and these turned out to be the best things I ordered at the fair. The presentation was a little disconcerting because it definitely looks like a frog sliced in half. But once you accept that, it’s not too different from eating chicken wings. The consistency is very tender, similar to scallops. And they are juicy and tasty — kind of tasted like fried catfish. I loved them.

The LA Fair is about three times the size of the OC Fair, and it’s a million times more fun. There are your run-of-the-mill fair sights (deep-fried foods, clearly rigged carnival games, rides, etc.), but there are also a dozen specialized areas full of unique exhibitions.

I spent a lot of time checking out the wilderness area, where they gave camping lessons, allowed visitors in the fire lookout tower, and taught us about California history and westward expansion. Another great exhibit was the Hall of Heroes, an entire hall dedicated to science fiction (and a few real-life heroes, like firefighters), from Dr. Who and Batman to Thor and Harry Potter. 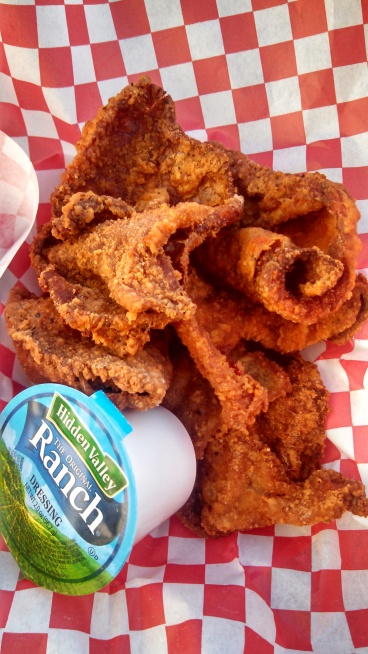 After dark, the grandstand was opened for the evening’s show: former “X Factor” contestant Cher Lloyd opened for pop-rock group Neon Trees of “Everybody Talks” fame.

The sound was mixed terribly for the show. Lloyd’s backing vocals were way too loud, and the first couple of songs from her set were completely unintelligible. The stage was also set up in front of a very scenic large mound of dirt on the horse track. But I guess that’s what you get when you play the county fair.

Lloyd was still adorable while playing her upbeat pop hits, “I Wish,” “Oath” and, my favorite, “Want U Back.” She seemed truly grateful to be playing, and asked the audience if we would be darlings and sing along to “With Ur Love.” So cute.

Neon Trees took the stage in some flashy outfits: lead vocalist Tyler Glenn wore black sequined pants and a sparkling, fringe-covered jacket, both of which I want to own.

The band has a couple of excellent, catchy songs (“Everybody Talks” and “Love in the 21st Century”), but a lot of filler tracks that were quite boring to sit through, exacerbated by the really uncomfortable benches we were sitting on.

The concert tickets were obviously too expensive, since the majority of the audience sat in the stands and left the $100+ seating area near the front of the stage pretty empty. But it was still a great time, and I ended up staying at the fair from noon until after 10 p.m.

Basically, it doesn’t get much better than a day with fried food, comic books, wild animals, rock ‘n roll and a little history lesson. Well, for me, at least. 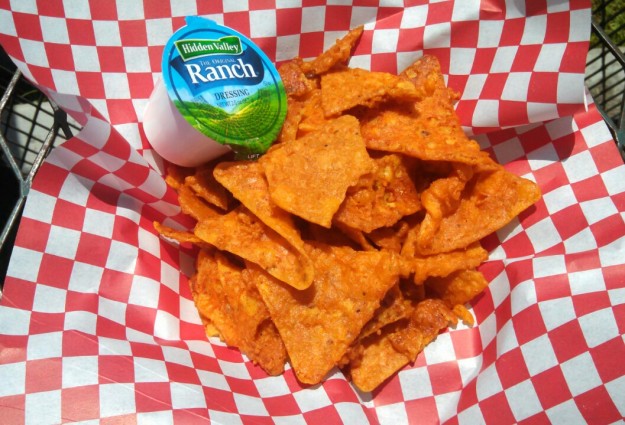 This is the kind of person I am: I made a list beforehand of all the deep-fried foods I wanted to try at the Orange County Fair last weekend so I could efficiently and strategically eat as many as possible. And this is what I know to be true: everything in heaven is deep-fried. Below is my rundown of the best foods I snacked on and the ones I’ll have to tackle next time.

I wanted to start the day with a cherry Pop Rocks donut from Texas Donuts, believe me, but I felt that it was unwise to eat that much fried dough and candy so early in the morning. It’s best to start off with a light meal to whet the appetite, I figured, so what could be lighter than Chicken Charlie’s deep-fried cookie dough? Such a good call. For $7.75, I walked away with three balls of moist, gooey chocolate chip cookie dough coated in a crispy deep-fried outer shell, drizzled with chocolate syrup and sprinkled with powdered sugar. Very chocolatey, and it would be cool if there were different cookie dough options (just imagine deep-fried peanut butter cookie dough with chocolate sauce on top!), but this is definitely a valuable way to begin the fair eating experience. All my breakfasts should be so satisfying.

Bacon-A-Fair offered up this treat with a side of whipped cream for $6.50, and it was not my thing. But I didn’t expect it to be. I am a vocal opponent of the savory-and-sweet combination in food, and I do not appreciate the trend of adding bacon to dessert. So, maybe I’m a traditionalist. Oh, well. These also weren’t served fresh, but I guess that’s to be expected on the last weekend of the fair. Still, I wouldn’t let this experience deter me. There were so many more deep-fried foodstuffs awaiting my arrival.

After enough dessert, I needed something salty. I was ready for Chicken Charlie’s deep-fried Doritos. This was a new, must-try item at the fair this year. For $8.75, the basket of chips was served with a side of Ranch dressing for dipping. The frying process made the chips light and airy (kind of reminiscent of the Baked! Lay’s chips), but they lost a lot of the flavor in the process. I don’t think Ranch was the way to go — these chips should be served with nacho cheese, and then they’d be perfect. 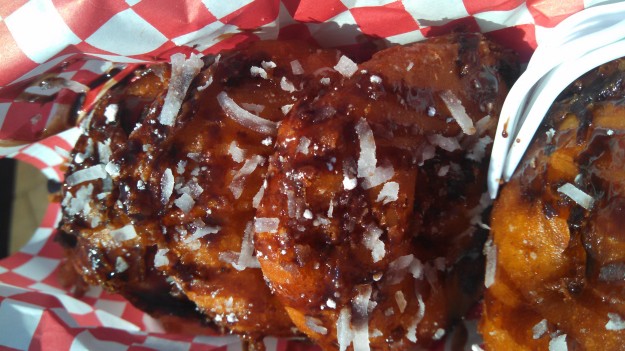 By the time I reached Pineapple Express, I was also two margaritas in, and I wasn’t sure I could eat any more fried food. But I still picked up an order of deep-fried pineapple for $6.75, because I’m no quitter. These fresh, juicy pineapple rings are battered and fried, then covered with chocolate syrup and coconut shavings. These were definitely my favorite OC Fair food item, and, look, I think everyone can agree that this is a very effective way to have a serving of fruit.