I hear talk that sightseeing tours are a great way to explore unfamiliar neighborhoods in big tourist destinations full of historical landmarks, just like Hollywood. I wasn’t sure what I’d take away from one, considering I happen to live in the aforementioned big tourist destination full of historical landmarks that is Hollywood. Maybe I’d learn something new and come away with a fresh perspective? Maybe it would suck and be boring. I was down to find out.

I set off on an “A Day in LA” tour hosted by the RastaBus — a tri-colored van, carefully decorated with “One Love” bumper stickers and peace signs, that played one reggae song at the very beginning of the day.

At 10 a.m., we clamored onto the bus from our starting point at the Santa Monica Pier. It didn’t take long for my boisterous fellow riders to commandeer the sound system, start blasting “No Diggity” and pop open a few bottles of champagne. Whenever I’d previously encountered a RastaBus in the wild, the passengers have always been really drunk and exceptionally annoying. But the thing about annoying, drunk people is that it’s much more fun to be with ‘em than against ‘em. So, I filled a red Solo cup and kicked back as we headed up the Pacific Coast Highway.

Brunch on the water at our first stop on the Malibu Pier. SCREAMfmLondon

The first stop was definitely the best part of the whole damn thing, and it was totally an anomaly. This is kind of deluxe treatment is highly atypical for a RastaBus tour, I assume. I just happened to be rolling with some well-connected sightseers who managed to surprise us with a hook up for free food. Individual results may vary.

We were dropped off at the Malibu Pier, where we were served an elaborate array of breakfast food at Malibu Farm, a ritzy farm-to-table restaurant located at the end of the pier. After weaving our way through fishermen with their wriggling mackerels, we were escorted into the Surfrider Room, a private dining area on the second floor of the restaurant that overlooks the gorgeous Malibu beaches.

Next time, I’d skip the rest of the tour and come straight here.

Malibu Farm’s fried egg sandwiches that made it all worthwhile. SCREAMfmLondon

There was supposed to be a tour of celebrity homes, but we mostly just peered up at Will Smith’s and Prince’s houses as we headed back eastward on the freeway. Seriously, that was it. Oh, and the tour guide also pointed out some scenery that appeared in a panoramic shot of “Two and a Half Men.” You know, just the essentials.

We drove in abject silence to a backing track of old school East Coast rap (for some reason) toward Beverly Hills, where our driver shared some fun facts about Rodeo Drive and offered to let us stop to walk around for a while.

“Keep driving!” someone yelled from the front of the bus. “Unless anyone has a black credit card we can use.”

We had a scheduled lunchtime stop at the Grove and Original Farmers Market, where we had about 45 minutes to explore by ourselves. It’s a cool place to hang if you have a pocket full of cash and longer than 45 minutes.

As we left the Grove, we took Melrose Avenue followed by Sunset Boulevard, and our tour guide finally began sharing some information about the area via the RastaBus intercom system.

I was glad to finally hear from him. I was beginning to worry that he had fallen asleep at the wheel. Unfortunately, just as I feared, most of his information was pretty basic. Like, he explained who Judy Garland was. I kind of wished I was giving the tour myself; I’m full of useless historical and pop culture trivia. It took a lot of self-restraint to keep from interrupting his monologues. 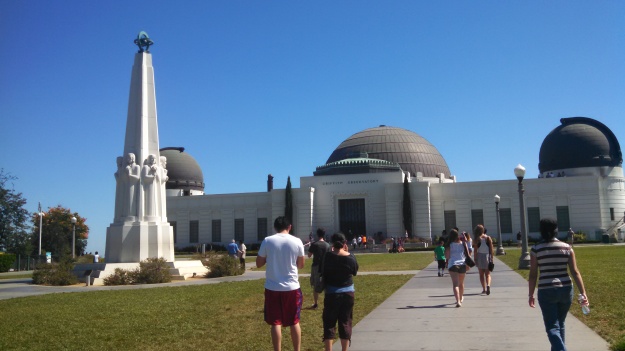 Our next stop was the Griffith Observatory, where we were given another 45 minutes to wander aimlessly and not really accomplish anything. I must admit I was getting a little tired of being forced out of the pleasantly air-conditioned bus into the actual great outdoors.

Since there isn’t much science you can accomplish in 45 minutes, I headed straight for the café and emerged with a plate of nachos. The Café at the End of the Universe is significantly less cool than it sounds with a name like that, but they did sell me a plate of tortilla chips covered in fake cheese, guacamole and pico de gallo, so what more can you ask for?

Cruising through Hollywood, the tour guide actually shared some interesting information! Did you know that the blinking light atop the Capitol Records Tower spells out the word “Hollywood” in Morse code? I did not.

Shortly, my tourmates grew jealous of my uncanny ability to locate and devour nachos under strange circumstances, so they insisted that our driver stop at Chibiscus Asian Café and Restaurant on Sunset for some food. We called the restaurant from the van (“Hello, there are about 13 of us, and we’re coming in right now.”) and filled the entire small space with our raucous presence. I watched K-pop music videos while everyone else ate ramen.

And, then, very awkwardly, I said, “Hey… Would it be weird if I asked you to leave me here?”

They didn’t seem to think so, so I ditched the RastaBus and hiked back home by myself rather than sticking around for the ride back to Santa Monica.

And, well. I did learn the thing about the Capitol Records Building. 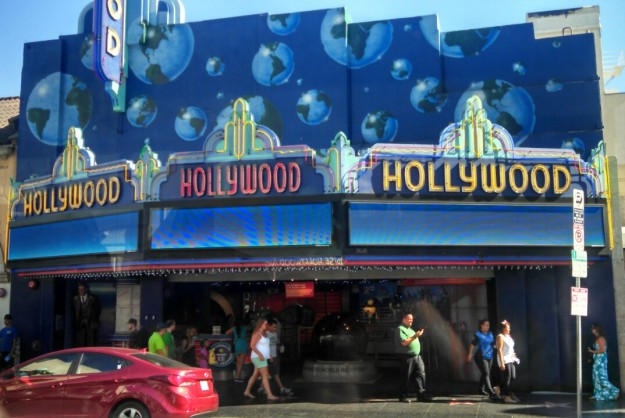 Here are some cool tours to take in LA that will circumvent the RastaBus experience:

Rock groupie Pamela Des Barres guides groups around Hollywood and Laurel Canyon, reading excerpts from her book, “I’m with the Band,” which details her escapades with Led Zeppelin and other classic rockstars.

Creepy tours include the classic Tragical History Tour of celebrity death locations, the epic three-hour Helter Skelter tour of the Manson Family murder locations, and a horror movie location tour, among others.

These morbid tours dig into LA’s most famous crimes, including the Black Dahlia murder, the serial killings of the Night Stalker and “hotel horrors” at hotspots like the Alexandria and the Cecil.