Love this delicious samgyeopsal: thick, fatty slices of pork belly cooked on a grill with mushrooms, kimchi and bean sprouts. It is (obviously) one of my favorite meals in Korea. SCREAMfmLondon 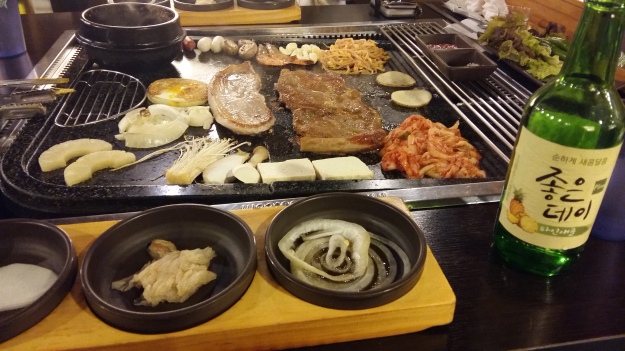 We came to this restaurant near Wangsimni Station to keep the party going after the last Big Bang ‘MADE’ concert. Ordered the samgyeopsal and galbi (marinated beef short ribs). They also carry the (amazingly delicious) pineapple-flavored soju! And we love how they cook egg on the grill inside of a slice of onion. SCREAMfmLondon 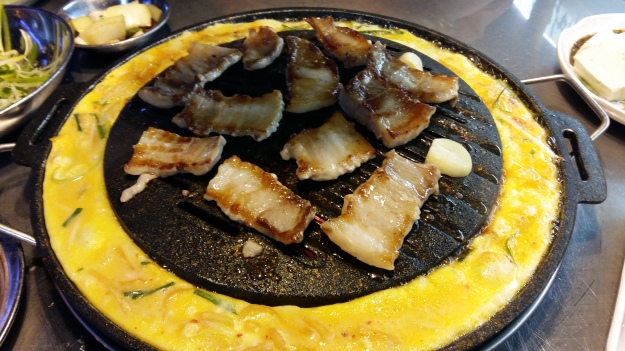 I wrote about this restaurant in my first Korean food post last year, and I still love it just as much! Nothing beats that excellent little omelette that surrounds the grill and cooks alongside your meat. SCREAMfmLondon

Can you tell that I really love samgyeopsal? This restaurant in Hongdae plays good music, has a serve-yourself counter for side dishes, and hands out free ice cream as you leave. Couldn’t get much better than that. SCREAMfmLondon

Flynn Talbot’s “Primary” installation is one of nine works of light-centered art on display at D Museum in Seoul. SCREAMfmLondon

The most popular art hotspot in Seoul right now is D Museum — a new exhibition space in Hannam-dong operated by Daelim Museum. The museum’s inaugural exhibition is “Spatial Illumination – 9 Lights in 9 Rooms,” which has been drawing crowds with large-scale light installations, sculptures, videos and interactive works by international artists.

The exhibit leads visitors through a maze-like space divided into nine rooms showcasing different pieces. The hallways (as well as many of the rooms) are darkened almost entirely as all of the artwork uses light as its medium.

Flynn Talbot’s “Contour” depicts a human fingerprint, showing the light within yourself. SCREAMfmLondon

The journey begins with the neon installation of Cerith Wyn Evans, a British contemporary artist. “Neon forms (after Noh II and III)” are inspired by Japanese Noh theater.

Next came one of my favorite rooms: Flynn Talbot’s color-changing piece, “Primary.” The light sources are concealed and the room is completely dark, which really gives you a chance to focus on the work and enjoy its strange, soothing qualities as the colored lights gradually shift from pink to blue to orange and everywhere in between.

Another favorite piece is Carlos Cruz-Diez’s “Chromosaturation.” Before entering the room, everyone is required to slip cloth covers over their shoes to protect the installation. The room is filled with different walls and shapes suspended from the ceiling. Different colored lights create interesting images when they catch all of the dimensions of the room.

One of the most popular rooms featured in D Museum’s current exhibition, “Spatial Illumination—9 Lights in 9 Rooms.” SCREAMfmLondon 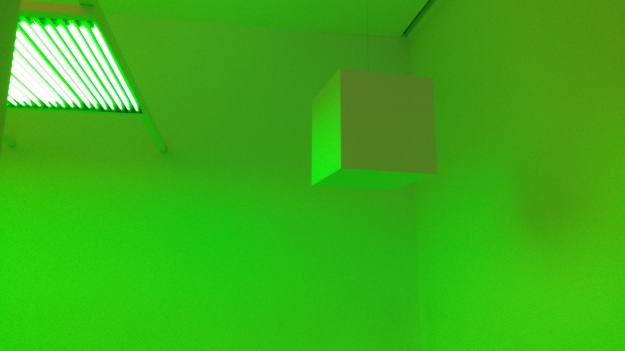 Such a fun room to explore. SCREAMfmLondon

After leaving the “Chromosaturation” room, visitors ascend the stairs. As you climb, Studio Roso’s “Mirror Branch” installation becomes visible. This piece is comprised of thousands of tiny mirrors forming the shape of a tree, which casts bright, twinkling reflections and bouncy shadows around the room and down the stairs. 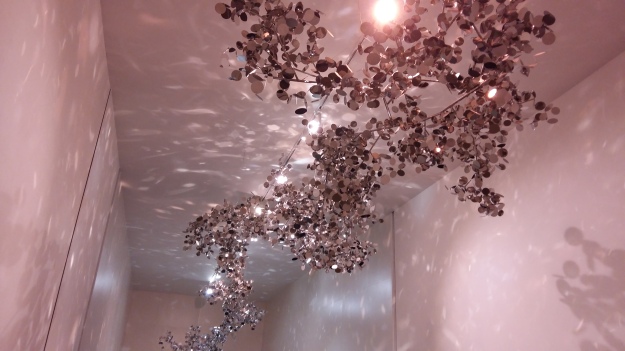 Next, you open a door and are transported into a very cool room: “My Whale” created by a Russian creative group of sound engineers, musicians and visual artists. The tunnel is lined with mirrors, creating the illusion that it goes on infinitely. The room plays whale songs and its pulsing light projections change in time with the sounds.

Tundra’s “My Whale” at D Museum in Seoul. SCREAMfmLondon

Paul Cocksedge filled one of the exhibition’s largest rooms with his piece, “Bourrasque,” which looks like sheets of lighted white paper blowing in the wind.

I particularly enjoyed Dutch artist Dennis Parren’s room. His “CMYK Corner” and “CMYK Wall” are specially-designed lights that project cyan, magenta and yellow on the surrounding walls. These pieces are simple but intriguing, hinting at the deconstruction of light.

I love this from every angle. SCREAMfmLondon

Parren also presented a CMYK installation called “Don’t Look Into the Light,” which uses its audience as the subject. The colorful shadows and shapes you create as you move through the space are really fun. 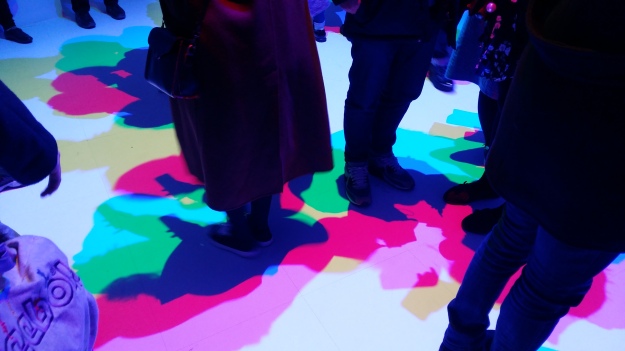 “Spatial Illumination – 9 Lights in 9 Rooms” is definitely a cool exhibition, and it’s totally worth checking out if you enjoy wandering around in the dark, appreciating neon and/or taking lots and lots of Instagram photos. I’m very curious to see what D Museum will present next. 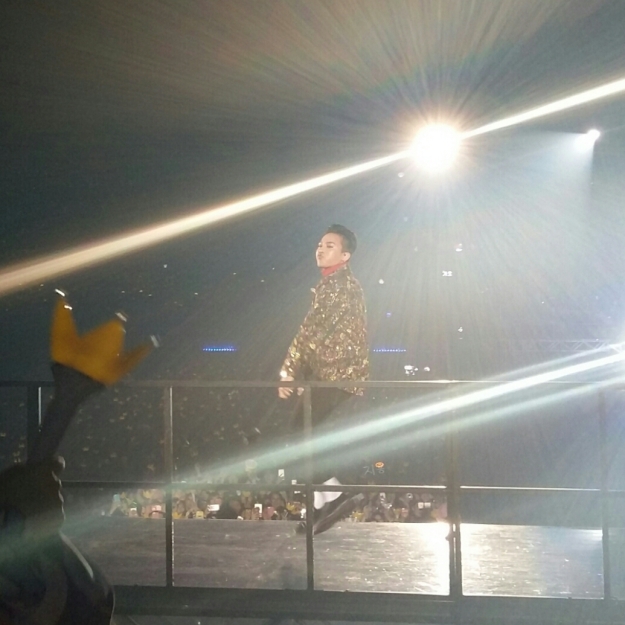 Last year, I saw the first two concerts of Big Bang’s MADE World Tour, where the group introduced the first singles from the “MADE” album series. Over the past few months, Big Bang’s “MADE” songs have dominated the charts and racked up awards while the band has performed a record-breaking tour around the world (the biggest k-pop show held in Canada, the largest k-pop arena tour in the US, the largest crowd a foreign artist has drawn in Japan).

On Sunday, March 6, Big Bang officially performed the final MADE concert back home at Olympic Gymnastics Arena in Seoul. The final show (the last of three Seoul concerts this weekend) was livestreamed worldwide and reached more than 3 million viewers. For those of us in town, the sold-out shows inspired fans to queue for hours in the pouring rain hoping for last-minute tickets (yes, including me, hello). 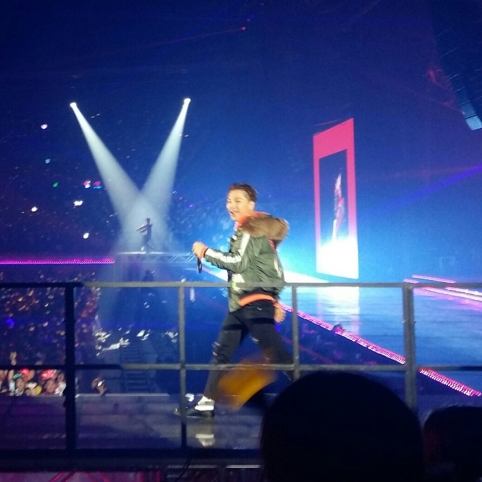 The show opened and closed with a bang — three, to be precise. “Bang Bang Bang” was the unofficial song of 2015, sweeping year-end awards and blowing everyone’s minds with its powerful chorus, extraordinary lyrics, and ultra-catchy dance beats. The song’s best lines set the tone for the night’s atmosphere: “Today, this place is lawless. / I’ll set this place on fire to burn up your heart. / I wanna make you go crazy.” Let’s go!

Throughout the night, Big Bang powered through the majority of their “MADE” hits including “Sober” (during which the band members donned fabulous glittery jackets of varying styles), the heart-breaking ballad “If You,” and “Zutter,” the amazing hip-hop duet featuring G-Dragon and T.O.P. Last April, Big Bang introduced “Bae Bae” and “Loser,” the tracks from the first “MADE” EP, at the Seoul concerts. This time around, the group performed “Bae Bae” twice, and fans throughout the arena held up signs proclaiming “Big Bang is my everything.”

The band members treated Korean fans to their usual solo stages as well as some additional silliness. Seungri performed a dance to Beyoncé’s “Single Ladies,” and self-proclaimed dance god/ghost T.O.P also really cut a rug in the strangest manner possible. GD sprawled out on the stage in front of me, cuddled with a stuffed panda, and then descended into the audience to cause some pandemonium — to our utter delight. The Big Bang members are ceaselessly charming and brimming with talent. There is a reason hundreds of us huddled under our umbrellas all day for the chance to see them live.

As the show wound to a close, we were all sad to see the end approaching. In addition to concluding the MADE World Tour, these shows also marked the 10th anniversary of the band’s debut in 2006. Before leaving the stage, Big Bang announced plans to hold a 10th anniversary festival this summer, earning shrieks of joy from fans who have been worried about the band’s future as the time for the members to enlist for their mandatory military service draws closer.

Finally, the band showed off their ten years of experience and expertise with an encore of “Bang Bang Bang” as well as the seminal 2012 hit “Fantastic Baby.” As always, Big Bang is a sight to behold. I fully intend to be there for the day-long anniversary festival this summer, and wherever the road takes them after that. After all, Big Bang is my everything.