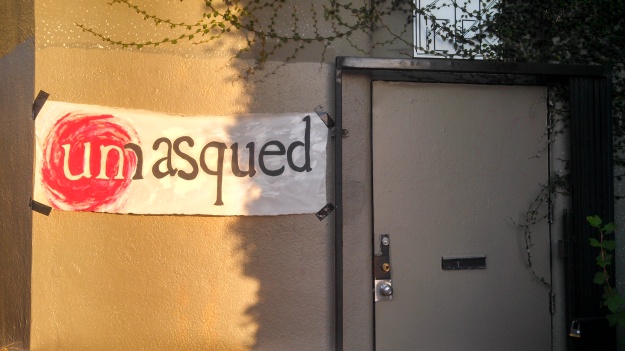 Edward Sharpe and the Magnetic Zeros plays from a stereo in the background as audience members take their seats upstairs at the Pieter Performance Art Space for the UnMasqued theater company’s second week of “Much Ado About Nothing” performances.

As we wait, the Friar (Daniel Ryan Wallach) approaches everyone individually and warns us that there is going to be some “audience stuff” later. He hands me a neon pink business card that, on one side, identifies him as “that one guy you met at that one party who thought you were awesome.”

It was the most interesting reinterpretation of “Much Ado About Nothing” I’ve ever seen.

In the UnMasqued production, the characters join together to form The Arragons, a touring band of bluegrass/folk musicians, who are returning to their favorite venue, The Messina, to perform songs they have written about their adventures for an upcoming album called “Much Ado About Nothing.” It’s really amazing how well this concept works and how seamlessly the original music is woven into Shakespeare’s text.

The story — with all its mischief, romantic entanglements and comedy — lends itself remarkably well to a cast of cool, young modern-day musicians.

The production begins with an impressive, rousing opening number featuring several of the multi-talented actors that comprise the cast on a range of instruments, including the accordion, fiddle and harmonica. It is understood that this is a homecoming concert after the band has been away on a year-long tour.

“That’s when I first met Hero,” Claudio (Dillon Horner) says of the last time the band appeared at The Messina when the song is finished. Then, the backdrop of colored handkerchiefs is moved aside, and the play begins.

The production is extremely well-executed, and elements of the unique bluegrassy theme are consistently evident in every scene.

Ty Fanning and Torey Byrne are especially entertaining as Benedick and Beatrice. They have great back-and-forth chemistry and are hilariously expressive as the characters evolve from hating each other to being tricked into realizing that they love each other.

Kristyn Chalker gives another standout performance as Don Pedro, the Prince of Aragon. She has a strong, commanding stage presence, and the gender-reversal of this role adds an additionally compelling element to the character’s story — most notably when it comes to her relationship with her troublemaking brother Don John (Josh Henry).

Before the second act begins, everyone in the audience is presented with a handful of confetti and a balloon, and Leonato (Neil Fleischer) leads us in a call-and-response sing-along of “My baby’s getting married, / But Benedick’s got the blues.”

It becomes clear that UnMasqued’s “Much Ado About Nothing” is not just a play and not just a concert. It becomes a much more immersive experience as cast members climb through the audience, pulling people up to join in on the dancing and, at one point, to take notes on a chalkboard during an interrogation of Borachio (Parker Wilmoth) by the night watchmen, who include the exceptionally amusing Dogberry (Harriet Fisher) — the real star of the second act.

Altogether, I was quite blown away by the quality of this production. Though the company is so new, “Much Ado About Nothing” is incredibly fun and outstandingly well-produced. I left the theater tapping my toes, feeling strangely excited about Shakespeare. It’s a good feeling.

3 thoughts on “Theater: UnMasqued presents ‘Much Ado About Nothing’”